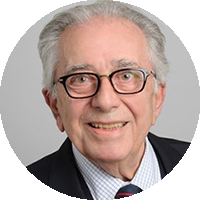 A CIRANO Researcher and Fellow since 2013, Antoine Ayoub is Emeritus Professor in the Department of Economics at Université Laval.

Holding a Ph.D. in Economics from the University of Paris 1 Pantheon-Sorbonne, his research interests are economic development, natural resource economics, transportation and energy economics, development economics, and international economics.

In 1973, Antoine Ayoub founded GREEN, the Research Group on Energy, Natural Resources and Environmental Economics, which he directed until 1988. The GREEN, which is attached to Université Laval and is still in operation, is the oldest research and training center in Canada in its field.

Antoine Ayoub is the great architect of the international petroleum economics conferences that have been held in Quebec City every two years since 1973. The impartiality and high level of these symposiums make them highly appreciated forums for oil producing and consuming countries as well as for the major oil companies, both of which agree to sit around the same table.

From 1980 to 1989, Antoine Ayoub organized and presided over oil economics seminars for leaders of the hydrocarbon sector in French- and Portuguese-speaking African countries. From 1980 to 1983, he was head of the board of directors of SOQUIP, the Société québécoise d'initiatives pétrolières, of which he remained a board member until 1999. That year, he co-founded MONDER, a network bringing together a dozen research centers from the North and the South interested in globalization, energy and the environment. He is currently its co-director.

Antoine Ayoub is the author and editor of a dozen books in French, English and Arabic, and some sixty articles and research reports. His last book was published in 1996 under the title Le pétrole : économie et politique.