In Memory of Claude Montmarquette 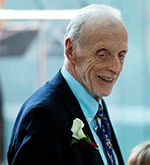 It is with deep sadness that we have learned the passing of our dear colleague Claude Montmarquette on Wednesday, September 8, 2021.

Claude Montmarquette was President and CEO of CIRANO from 2009 to 2016. With his colleagues and friends Robert Lacroix and Marcel Boyer, he was one of the great builders of CIRANO. Claude was always a very active CIRANO researcher and Fellow. In recent years, he has been involved in projects that were close to his heart, notably the improvement of economic and financial literacy among Quebecers, public health, and education and school dropout.

A specialist in the economics of education and public choice, Claude Montmarquette was Professor Emeritus in the Department of Economics at the Université de Montréal. He began his teaching career there in 1973 and was chair of the Department of Economics from 1989 to 1995. A researcher at the Centre de recherche et développement en économique (CRDE) and then at CIRANO, he held various management positions at CIRANO from 1999 to 2016, including that of President and Chief Executive Officer for more than seven years. D. in economics from the University of Chicago, he held the Bell-Caisse de dépôt et placement du Québec Chair in experimental economics at the Université de Montréal. He pioneered the implementation of experimental economics in Quebec, with lasting benefits for government departments and agencies. Claude has assisted the Quebec government in the design or development of multiple programs and policies in areas such as education, health and public finance.

Over the course of his career, Claude has been a visiting professor at several universities, including Université Paris I Panthéon Sorbonne, Université d'Auvergne and Université Lumière Lyon 2. He has chaired and participated in numerous committees for the Government of Quebec and has served on several others, both nationally and internationally. He was elected a Fellow of the Royal Society of Canada in 1998 and a Member of the Order of Canada in 2013. He was also awarded the Queen Elizabeth II Diamond Jubilee Medal in the same year. Claude Montmarquette received an honorary Doctor of Laws degree from McGill University in 2013. In 2016, he was named Commander of the Order of Montreal. In 2019, he was named an Officer of the National Order of Quebec and received the Gérard Parizeau Award for his work in economics of education.

Claude trained generations of students who are grateful for the knowledge he passed on. His passing will leave a great void for each of us and for Quebec.

We will continue to value his accomplishments and keep his intellectual legacy alive. We will keep the memory of a great man... who had great humanistic values.

Our most sincere thoughts are with his family and friends.

How do we navigate through the major transitions in the world of employment?