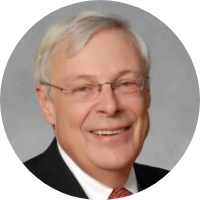 He began his career in 1971 as a university professor in solid state physics. He was a professor of physics at the Technische Unversitaet Muenchen (71-73), a professor of epidemiology at the C.H. Ludwig Maximillian Universitaet (73-74) and of computer science at DePaul University in Chicago (99-00).

He joined N. V. Philips Germany in 1974 as a Research Group Manager. Seven years later, he became a Chief Technology Officer for N.V. Philips, first in the Netherlands and then in the USA. At Philips, for over sixteen years, he managed several disruptive product innovations such as: solar-energy collectors and control systems, heat-pump systems, energy storage devices, the Minitel terminal, Philips computer games & consoles and, the Compact Disc in its various formats. Each of these billion-dollar products positively impacted the lives of millions of consumers worldwide.

In 1989, he launched his first multimillion-dollar startup in the Karaoke space and, from then on, became a successful six-time repeat entrepreneur, founding and exiting companies, in the multimedia production, computer games, digital video & audio chipsets, videoconferencing and information security market spaces.

Between 2004 and 2015, he played a key role as the founder and former chairperson of Quebec Angels (Anges Quebec), a two term member of the National Research Council Industrial Research Assistance Program advisory board, a member of the PassWordBox Inc. advisory board, a two term board member of the Foundation of the Mayor (Montreal Inc.), a board member of Toon Boom Inc. as well as having been a board member of the SAT, Stromatec Medical Devices Inc., Medical Intelligence Inc., Univalor Inc., Hexagram Inc., CVT Corporation, Wajam Corp., McGill University Innovation, OMSignal Inc. and SparkUp Inc.. During this period, he served as a venture capital partner at Cycle Capital Management, Cycle-C3E Capital, iNovia Capital, MSBi Capital. Between 2004 and 2006, he was the director of McGill University’s Office of Technology Transfer and Industry Funded Research Office.

He has an extensive network of business contacts and sat on numerous boards of major corporations as well as having been an advisor to venture capital groups in Canada, Europe, Japan and the USA.

He has authored over a hundred and fifty publications, patents and books in fields as varied as solid state physics, epidemiology, clean-tech, software engineering, multimedia, cryptology, optical systems and chip set development.

After twenty-five years as an entrepreneur he is now focusing his energies on mentoring the next generation of entrepreneurs, managing technology investments and defining innovation policies for governments and industry.