Good initiatives are worth repeating. The centerpiece of an evening on the Financial crisis hosted a year ago at CIRANO was an analysis of the origin of the crisis by Robert Amzallag former President and CEO of BNP Paribas (Canada), and currently a CIRANO Invited Fellow. That evening was a signal success, so we decided to have a web retrospective and see how the events of this past turbulent year have supported his insights as to the future evolution of events.

Our web retrospective has various elements all accessible from this page: 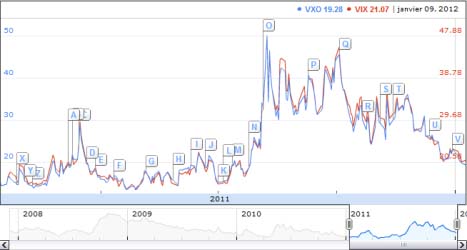 The chronology begins in December, 2007 and ends in January, 2012. The user can trace up to three time series on one graph with highlighted events (see example on the left) for any desired time frame.