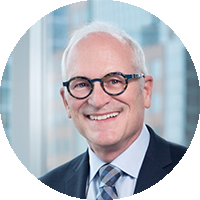 A CIRANO Invited Fellow since 2018, Miville Tremblay is Chair of the Accounting Standards Oversight Council and Senior Fellow of the CD Howe Institute.

Mr. Tremblay joined the Bank from the Caisse de dépôt et placement du Québec, where he was Director of Strategic Intelligence. He also worked for several years as a financial journalist, particularly for the daily newspaper La Presse, reporting on economic policies and financial markets. At the beginning of his career, he taught Canadian politics at the State University of New York.

Mr. Tremblay is the author of two books on finance and business and has received numerous distinctions, including the Atkinson Fellowship in Public Policy and the Prix du livre d’affaires PricewaterhouseCoopers.

Mr. Tremblay has an Executive MBA from the Université du Québec à Montréal, a master’s degree in Public Policy Analysis from the Université Laval, and a bachelor’s degree in Political Science from McGill University. He holds the designation of chartered financial analyst (CFA), and he is a former president of CFA Montréal. He also holds the ICD.D designation.
[ - ]
[ + ]
University
President, Accounting Standards Oversight Council

Miville Tremblay is joining CIRANO as an Invited Fellow