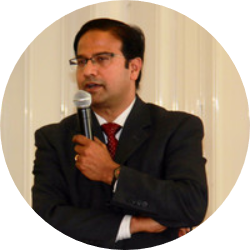 A CIRANO Associated Researcher and Fellow since 2012, Sunder Ramaswamy is Vice-Chancellor of Krea University. He is also on leave from Middlebury College, where he is a Distinguished College Professor of International Economics.

From 2009 to 2015, he was the President of the Middlebury Institute of International Studies at Monterey, California (MIIS). He has been a faculty and administrator at Middlebury College since 1990, and has had sabbaticals at the World Bank, Vanderbilt University, IFMR & the Madras School of Economics.

He has co-authored and co-edited 4 books, written scores of articles, and delivered over 150 lectures on Globalization, Economic Development, Indian Economic Reforms and Economic Literacy. He has won awards for his teaching and he/his views have been featured in national and international newspapers. He has received grants for his academic work from Ford Foundation, USAID, SW Davis Foundation, and he has been a consultant to UNIDO, UNCTAD, UNU. He is currently working with a group of academics, entrepreneurs, philanthropists and industrialists to establish a residential liberal arts and sciences university near Chennai, India.